A part of a master's thesis project reviews of existing buildings were compared to outputs from the initial multi-criteria optimization matrix.  These reviews worked as a form of validation for the existing structures as well as for optimization matrix. Errors or divergence within the matrix indicated either poor functionality on the matrix's behalf or on the building design against a consistent set of desired design goals.
Results Briefing

Cenni di Cambiamento has become the largest timber based collection of buildings in the world.  The tallest building among the numerous towers and podiums is 9 stories tall.  The project was created as a social housing project near Milan, Italy. The first floor was produced with concrete with all subsequent stories being completed with CLT panels.  A coordinated floor plan and building conception idea allowed this structure to be well coordinated and meet construction goals. The project had a 100% range of acceptability with the optimization matrix and zero divergency on any of the construction systems.

Forte Living is Australia's first modern multi-story timber project. The building is 8 stories tall and housing residential units in the upper floors and a small commercial area on the ground floors.  The structure is almost entirely built out of Cross Laminated Timber Panels. The project was commissioned and built by LendLead Holdings. Forte Living scored a range of acceptability of 99.2% within the optimization matrix, with an average outcome divergence of 0.1%

Banyan Warf is a new project located near the centre of London. The project is a premium apartment building with outstanding and daring architecture used to push the building design to new frontiers. The project is primarily composed of CLT panels in conjunction with a concrete central core. The building was design by Hawkins Brown for Regal Homes of London. When paired with the matrix the range of acceptability was 91% and the average discrepancy was 0.7%. This project demonstrates the high and and unique adaptability of modern timber construction.

The LTC One located in Dornbirn, Austria is an 8 story hybrid timber structure meeting Passive House standards. CREE, a subsidiary of the Rhomberg group has created a innovative modular construction technique to quickly erect these beautiful hybrid timber-concrete structures. The LTC One scored a range of acceptability of 77.4% within the optimization matrix, with an average outcome divergence of 1.8%.

Murray Grove, also known as the the Stadthaus project was one of the first modern tall timber projects completed in 2009 that demonstrated the pure speed of erection possibilities with a coordinated design and production process. The optimization matrix scored the project with a  94.3% range acceptability, and an average divergence 0.5%. 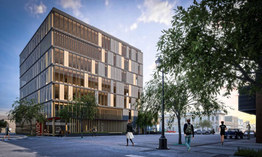 The WIDC located in Prince George, BC is a 6 story modern multi-story timber demonstration project. The project was designed by Michael Green Architecture and engineered by Equilibrium Consulting.  The WIDC scored a range of acceptability of 52.1% within the optimization matrix, with an average outcome divergence of 4.0%. This was due to one key design system that did not match other desired traits.